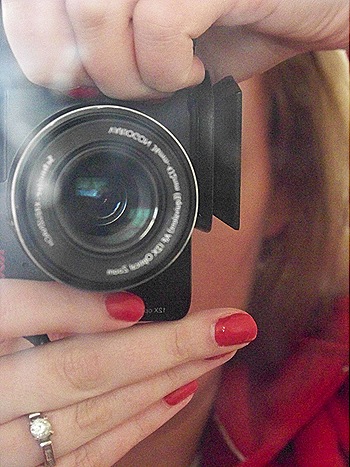 Post like this make me feel really, really stupid. Because seeing your faults glaring back at you can be awfully tough to take in sometimes.

As some of you saw, I posted a note on THRIVE’s Facebook page on Wednesday that my cheapie Kodak EasyShare camera was completely toast.

I was in the middle of taking pictures of the inserts for the cabinet door tutorial and the camera was resting on the kitchen counter. But as kids wandered in and out to see what mom was doing … and as I climbed on and off bar stools to reach the top cabinets … and spun around to grab the camera for the next shot … somehow I caught the edge of the strap and looked back just in time to see my camera crash hard on the floor. The batteries immediately splattered across the floor as the camera skidded on its side and then came to rest lens-down next to the dishwasher.

And the second it hit, I knew it was gone.

I could see right away that the battery door had busted off completely, and a long history of small children and cheap cameras has taught me that this was an electronic fatality not worth the money to repair.  Even still, I tried the whole duct tape thing, hoping to limp through the rest of my pictures–but it was pointless. In desperation I called my neighbor as soon as she got home and borrowed her camera to get enough pictures to finish the post and get it up minutes before midnight.

I always figured that I’d be screwed without a camera because I’m one of those people who takes lots of pictures. I mean lots and lots of pictures—easily 1,200+ a month. So missing the goofy things my kids do and not being able to work on projects for THRIVE immediately worried me. But what I wasn’t at all prepared for though was the grief.

Not just because I had no idea how we’d afford to replace it, but because this adventure behind the lens has opened a whole new world for me. I’ve loved capturing our family’s life, our adventures and especially our struggle to thrive in a place we never thought we’d be. Taking pictures has been a way for me to capture and constantly remind myself just how blessed we’ve been when it feels so hard, so much of the time.

And so I woke up Wednesday depressed  and unbelievably sad. Mr. Thrive had the day off so we sat in bed as I fought back tears and worried out loud about what to do. After I had gotten everything out of my system, Mr. Thrive quietly told me that he received a bonus from work—his very first in this new position and nothing huge—but enough for me to replace the camera with an entry level DSLR.

And all Wednesday morning, I was floating.

I happily checked prices online, compared features for the hundredth time and thrilled at the chance to finally, finally be doing something I’d dreamed about for years. And in the excitement of being able to get just what I wanted instead of having to make due, my gratitude for that simple little camera started to slip away.

But the longer I looked, the more than little voice told me that it wasn’t right. (Not that I didn’t keep searching and looking anyway). I didn’t want to give up a DSLR—didn’t want to have to Rock What I Got—but the prompting was unmistakable: I needed to look at the other end of the camera spectrum, back near the $100 cheapie model that had just died. And so I reluctantly started paring back that search and looking at simpler and simpler models.

But instead of trusting that prompting voice with gladness and faith, I felt more and more resentful about being this close yet again and having something important to me slip away.

Instead of seeing the miracle in having a camera break the same day as an unexpected bonus, I was disappointed that I wasn’t getting something bigger, better or cooler.

Instead of being filled with the love of my husband and his care and support of me, I inwardly pouted like a spoiled brat.

And so once again, I got spiritually whacked up side the head and loving told to stopping the whining and be grateful. As I closed out the camera websites and returned to my homepage, the images from the tornadoes in Mississippi and Alabama stared back at me and seared holes in my conscience.

My heart ached for all of those families without homes, without possessions, without loved ones. And I was reminded again just how much disasters like this have the amazing ability to clear away the crap and pettiness in our lives and conduct.

So in the last three days, there have been a lot of prayers for the people so hurt by the storms in the South … and a lot of reflection about selfishness and attitude and learning Rock What Ya Got … and a profound sense of thankfulness for what I learned with my old camera with all of its limits.

This whole time I’ve wanted to become a better photographer and thought that a big girl camera would do the trick. And while I know that that day will eventually come, I’m beginning to see now just how much my prayers have been answered by not having one after all. Having to stretch and make do with the basics has forced me to get creative, to study and most of all, to practice like crazy.

Like in those first few nervous weeks of blogging when I needed that perfect project shot to submit to my favorite blogs for features, it took dozens and dozens of dozens tries, but my camera came through for me.

And when I wanted to imitate all those gorgeous pictures in blogland with the soft blurred out background … it took hundreds and hundreds of shots, but I finally figured how to make my camera fake it.

And I really don’t know if I would have made this much progress or tried as hard if taking good pictures was handed to me on a silver DSLR platter.

So a new camera has joined our family and I’m loving it. It didn’t cost much more than our old model and even has some upgrades that will be fun to start practicing with. The old, broken camera now sits on my shelf and will probably stay there since I don’t have the heart to throw it away—it taught me too much. Right now I like having a reminder of just how much I have to be grateful for.

22 thoughts on “Rock What Ya Got: Camera Edition”