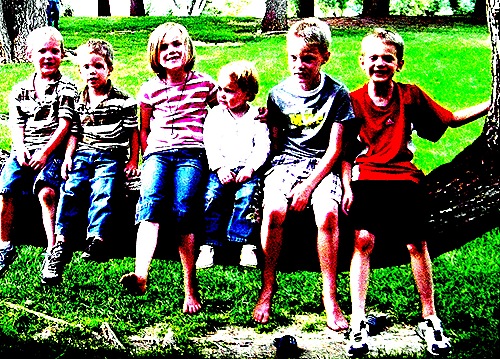 Happy Almost Mother’s Day out there to everyone from me and my half dozen kiddos who test my patience, sanity and soda sobriety daily.

This week an entire gallon of milk, three pounds of cereal, a 6.4 oz. tube of Crest Sparkle KIDS toothpaste, two packs of Trident, a box of Crystal Light packs, a Jiffy cornbread mix, a pound of Country Time lemonade powder and a full bottle of mouthwash were sacrificed on the alter of This-Is-What-Kids-Do-To-Make-You-Crazy.

Add to that three hours in a dental waiting room with five kids, a camera plunging to its death and a toddler who refuses to be potty trained and it’s been a long week.

Sunday will be an awesome day because ten years ago my greatest heart ache was lifted and I became a momma. And this year, like each year before, I remember just how badly I wanted this day … how much it hurt to be left out on this day … how much I prayed for someday.

And on Sunday I celebrate that someday came.

And though my children have declared that I will be poor with stained carpet ‘til the end of days, I give thanks for all six of the miracles that came to this broken, infertile woman.

Because even now, I still remember those first three years being married and the heartache of watching everyone around us start families and feeling like we never would …

~ Driving into work one morning with the worst case of nausea and feeling bitter—like it was some sort of cruel joke to go through this regular cycle of missed periods, heavy nausea and then negative pregnancy tests–and then to start my cycle a day or two after the test came back negative.  I was so desperate all through my shift to make the nausea go away that I decided to run next door to the store and get a pregnancy test so that it would hurry up and be negative and I could feel better soon …

~ Taking that test in the employee bathroom and screaming out loud when that faint little line appeared … and stumbling out of the bathroom shaking and crying so hard that my co-worker ran over to see what was going on … and her giving me a hug when I showed her the test … and me pushing back and shaking my head and telling her through sobs that it wasn’t real—that she didn’t understand–because I have two doctors and two miscarriages that say can’t have kids … and her grabbing me by my shoulders and gently shaking me until I stopped talking and her looking straight into my eyes and saying, “Nike, you’re going to be a mother” … and me losing it completely as her words pierced my soul and I began to believe …

~ Being so horribly sick the whole nine months and throwing up several times a day, everyday …

~ The false alarms, the day-and-a-half in labor, the c-section and all the complications …

But mostly I remember looking at my son and knowing that I was a mother now.

And despite how overwhelming and scary that was, there was so much joy and gratitude. And I think there really must be an extra measure of sweetness to those feelings of new motherhood when it has been withheld for a time.

I am moved to tears each time I read of Hannah in 1 Samuel and read the tender words, “And the Lord remembered her ….”

And like Hannah I can truly say, “For this child I prayed ….”

And being able to share this experience with my sisters, sisters-in-law, neighbors and friends is all sorts of wonderful. Because they’re amazing mommas … and they love their kids fiercely … and they get what it’s like to go through a week of toothpaste and milk and lemonade and waiting rooms from hell.

And in the six months since I started this little blogging thing, I’ve been privileged to “meet” so many incredible women who are mommas and bloggers and crafters-to-stay-saners who get it, too.

And being surrounded by all of you gives me the hope that I can someday be like the women in my life that I look up to most—women like:

who recognized my post-partum depression immediately and watched me like a hawk—calling and emailing me everyday for a year with the encouragement and adult conversation I desperately needed. And even though I was struggling to know which end was up, she believed in the mother that I could become.

who rushed in last year when Mr. Thrive and I were on the verge of cracking up and even divorce because of the crushing stress of the whole young-family-with-six-kids-and-autism-and-layoffs-and-poverty-and-never-ever-ever-ever-ever-ever-having-any-time-or-money-for-ourselves thing. And that weekend way was magic … and restored our hope … and helped us get to the good place we are today.

who has always been the one to call me on my crap and make me accountable for what I’m doing and not doing—and I love her for it. And last October she sat across the booth from me at Taco Bell on the last day of her visit and told me that I needed to stop procrastinating and worrying and waiting for the perfect moment to started THRIVE. She told me to not be scared of failure, but to leap … and trust that this was the right thing to do … and that answers to some of my questions and family challenges would come through doing this.

And two weeks later my first post went up.

So Happy Mother’s Day to all of us.

Hope tomorrow brings you the chance to remember your first someday and to celebrate the women in your life who make each day a little easier to get through.

And to the woman out there who still carry the heartache of someday … please know how many of us out there know your hurt, pray for you always and never give up hope that your someday will come.