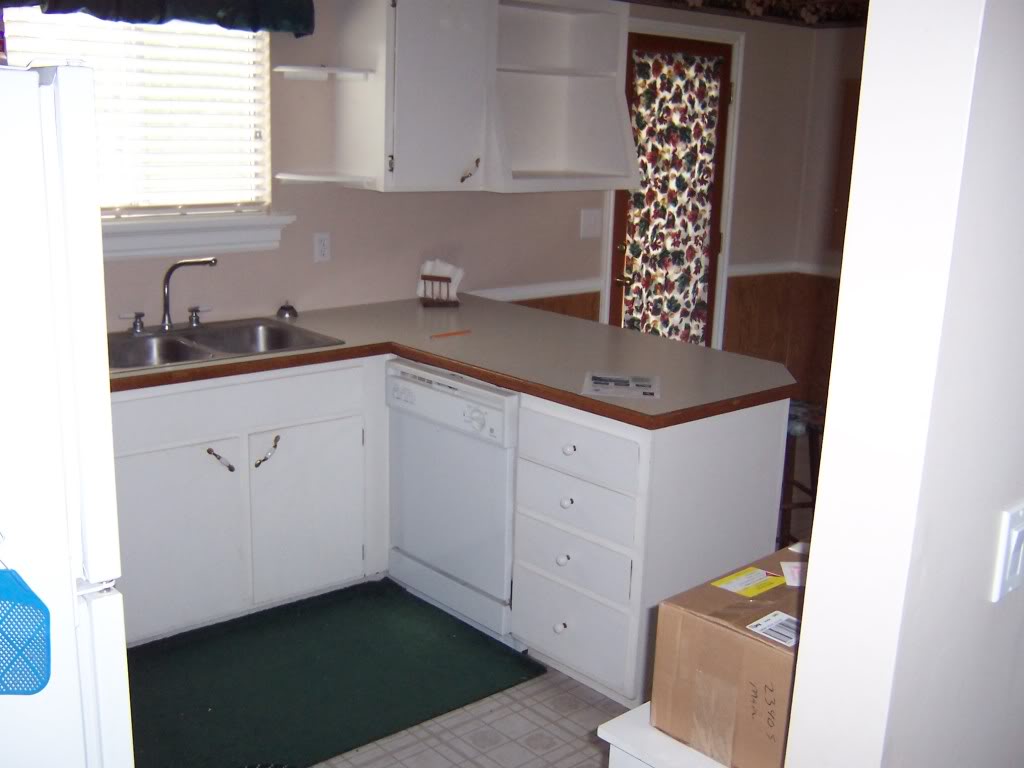 I’ve been working on this post for a few weeks and it just keeps getting longer and longer—too long, actually. So I’ve broken it into a few smaller posts to hopefully make it easier to read and track our progress throughout this year.

So for this first post, I’ll walk you through my living room and kitchen and catch you up on how those rooms have evolved.

These pictures were taken during our first walk through of the house. And I’m going to apologize for a lot of the old pictures right now … I took them long before I knew what blogging was and had learned The Ways of The Tutorial.  So, sorry for the pictures that stink.

Our floor plan is like most late 70’s split-levels: from the front door you come up a half flight of stairs to the kitchen with the living room to the right.

The  wood veneer on all five of the kitchen cabinets had been removed and the doors were replace with plain plywood fronts with a slightly routed edge on the inside.

The original brown linoleum had been covered by peel and stick vinyl tiles. Overall, it was a big improvement over the original flooring, but the finish was starting to wear through and the tiles near the sink had shifted quite a bit.

The random white shelving unit to the right was actually a cheap entertainment center from Walmart that the previous owners had been using as extra cabinets. We thought it was so weird to have it in the kitchen, but as we started unpacking and came up short on space, we used it too. For years.

The wall between the kitchen and living room had been partially removed to open up the area, and the back door at some point had been replaced with a nice wood-framed glass door that had been covered by the floral curtain.

The bead board and railing from the kitchen wrapped into the living room which had a large front window.

Within the first weeks and months of moving in, the black, rust and teal floral curtain on the back door came down, the green puff valence over the kitchen sink was removed, the hardware on the cabinets was removed and puttied over and the large green carpet thing was tossed. (It was gross.)

One thing that I tried to change, but couldn’t was the bizarre placement of the frig. It is actually touching the stove and was shoved into what used to be a pantry. One of our neighbors told us that when the previous owners added the “L” to the countertop to create some more space, the frig (which was where the entertainment center is in this picture), was too close to the counter. As in you couldn’t open the frig door without hitting the counter.

So to fix the problem, they took the door off the pantry, cut the doorframe an extra four inches wider and shoved the frig into the pantry right next to the stove.

I know, I know. It makes no sense.

For a few months I tried rearranging the kitchen and put the frig in the only other place it would fit (the opposite wall), but it was a pain.  It is was seriously weird to be able to see the frig from the front door.

So back into the pantry it went and has been there ever since.

The other change I made right away was to get rid of the black, rust and teal wallpaper boarder and matching floral arrangement that ran along the top of the kitchen wall and ended at the random wood shelf thing next to the living room.  The bulletin and chalk boards came down, too, and were used in other rooms.

And that’s how the house looked for the first nine months.

When I started talking about painting, I wanted two things: to paint the kitchen red and the bead board any color but “wood.” Mr. Thrive was fine with the red, but really wanted to keep the wood.

… and along the really long wall …

… and into the living room.

And I LOVED the red. I was THRILLED with the red. I NEEDED to go red.  And I still, to this day, love the red.

That being said, there were some challenges with having this much red that I hadn’t anticipated.

For starters, it made our already low ceilings look even lower. So I freaked out a little bit and nixed my plans to paint the ceilings, leaving them plain white.  And I started worrying that maybe it was just too. much . red.  So I repainted some of the entry walls …

… and the hallway a light cream color to lighten it up a bit.

And for a few months I was happy with the two different colors, but over time it’s started to bug me. Every time I looked at my living room, I wanted to change something, but was never quite sure what it should be.

Another challenge I wasn’t expecting was how jarring the dark red would look up against pure white cabinets. Again, I liked it at first, but over time I really wanted to change the cabinet color.

The fact that my kids treated the white doors like blank canvases didn’t help either.

A few months after kid #5 was born, I took advantage of company in town and decided to tackle the cabinets.

But I wanted to do more than just paint.

I was seeing all these cute, simple, rustic looking picture frames everywhere with distressed edges. I started wondering if there was a way to recreate that look for cheap using my existing cabinets.

So with Mr. Thrive and my in-laws help, the upper and lower cabinets were painted black (inside and out) and the lower drawers traded in their white knobs for cheap wood knobs stained to match the bead board.

And for the doors I designed simple frames that Mr. Thrive built right on top of the existing doors using 1/8” plywood.  He left tiny openings on the sides and tops of the doors to let me slide in photo mats and pictures.

And it turned out just how I imagined! I LOVE my cabinets!

I made the photo mats out of .50 poster board from Walmart and mounted my favorite black and white family pictures. I love changing the pictures out for kids’ birthdays and holidays.

And when I’m in the mood for a different look, I can slip the pictures out and leave it plain for a little while.

(Memo to me: please wipe off cabinet doors before taking a picture. Thank you.)

Last Christmas I drug out the dollar snow flakes and tacked them up with removable picture hooks. Loved that look, too.

So there you go … pictures and history of my living room and kitchen.

Tomorrow I’ll show you two projects I’ve done in the kitchen and what our game plan for tearing that room apart.

Edited to add: Please leave a comment if you’d like a tutorial on the picture frame cabinets. If there’s enough interest, I’ll put one together.

42 thoughts on “You have to start somewhere”