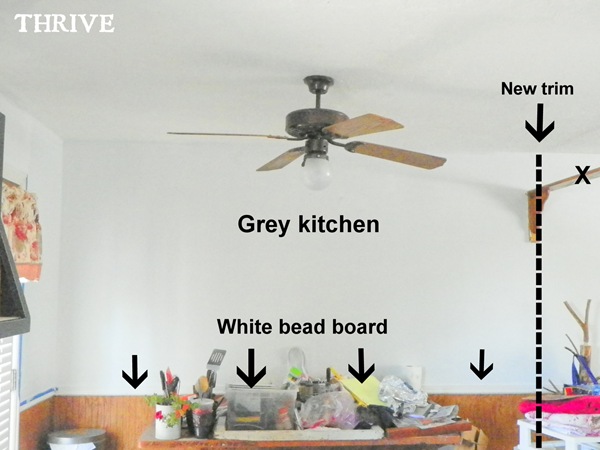 By August I had hoped to be much farther ahead on our upstairs than we are.  Oh well.  Progress—even the impossibly slow kind—is still progress none the less.

On my last post and Facebook updates, I had decided to move forward with painting the kitchen grey, the bead board white and get rid of the random plant-shelf-thingy dividing the living room and kitchen.

I followed your awesome Facebook advice and skipped sanding the bead board all together (thank you, thank you!) in favor of oil-based primer. I’ve never seen any dropped off at our local recycling center (only latex) so I broke down on bought a gallon. Best $16 ever spent thankyouverymuch and totally worth the fumes.

For the kitchen and living room paint, I took the two mostly full 5 gallon buckets of beige from the recycling center and mixed them together to get a single color to use as a base. From there I pulled out 1/3 of it and added some dark grey paint to come up with a kitchen color.

What I ended up with was this:

(Please excuse the gianormous mess on my kitchen table. We were still pantry-less at this point.)

And I loved it. I mean really, really loved it.

But Mr. Thrive wasn’t thrilled and thought it was still too yellow-y. But being the good sport that he was, he said to keep going and see how everything came together.

And as you can see from the picture above, the next task was to take down the random plant shelf thing that separated the kitchen and living room. I popped out the wood plugs and unscrewed it from both sides of the wall. The first side had only been screwed than then caulked to the wall and came off with minimal damage. Yeah!

The other side … not so much.

For some reason the previous owners had used liquid nails along with the screws and caulk which made a much bigger mess. After carefully scraping out all the left over dry wall, I cut a scrap piece of sheet rock and glued it in place. Since the hole are will eventually be covered by a floor to ceiling trim piece I’m not too worried.

My next honey-do from Mr. Thrive was the pantry.  For the last five years we’ve had the uber classy plastic garage shelving from Target.

Besides the fact that it was, well, classy, it was a major clutter collection point and always a mess. Plus the textured plastic was a pain to keep clean which means it rarely was – bleh.  So I’ve been wanting a pantry there forever.

So just before we left for Washington, I hauled up a pair of pantry doors that I found at D.I. for $16 three years ago that have been sitting in our laundry room collecting dust. To make this project work, I had been waiting for 2×4’s to frame in the support walls. Luckily we had the chance for a service swap in June and were able to keep the left over materials after helping some friends build some new walls in their house.

So the plastic shelving was moved downstairs to our food storage room to make room for the new pantry.

I had hoped to carefully remove the trim along the floor and reuse it around the pantry. Yeah, about that ….

The trim had been heavily glued in place and had to be ripped off in pieces. Mr. Thrive had to pry so hard that he actually punched through the wall in a couple places.  Oops.

The other thing we discovered when we started cutting through all the layers of linoleum to get down to the subfloor was that painting the kitchen floor was out.

I had hoped that we had plywood underneath all those layers, but it turns out that that there’s a layer of particle board on top. We’d either have to go down an extra 3/4” and removed the particle board –or—try and paint the particle board itself. Neither option sounds good so we’re back to square one on the floor.  Bummer.

But anyway, back to the pantry.  I decided to hang the doors upside down so that I can use the solid panels for some sort of bulletin board for menus, etc.

It’s taken a while, but the framing, taping, mudding and inside painting of the pantry is done. All that’s left is to install the shelving inside, clear off the kitchen table (yeah!) and put the trim around the pantry.

As soon as the finish work on the pantry is done, I can finish the kitchen painting and tackle the living room.

But there’s a bit of a snag there, too.  Hopefully it will be worked out by Wednesday when Mr. Thrive has a day off and we’re scheduled to finish painting.  Fingers crossed ….

In the mean time, I just got two furniture pieces for the living room repainted and am excited to share them with you later this week.