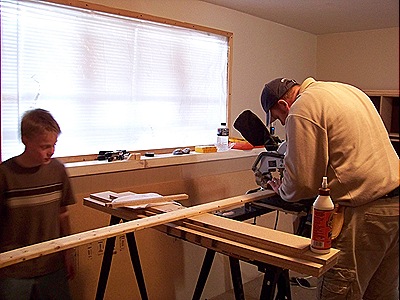 It all seemed so easy on paper: swap bedrooms … build new beds … spackle/sand/paint new beds … get rid of the crib … make a few runs to the dump.

Except I should have known better.

House projects never, ever go as fast, easy, cheap or clean as you plan. Toss little kids and a few unexpected snow days into the mix and you “up” the mess/money/time factor by ten. Ha!

For over six months we’ve been working and saving towards getting new beds for the kids—all six of them. And while beds and mattresses aren’t remodeling projects per se, I still wanted find ways to incorporate Thrive-friendly projects and savings to keep the costs way down.

To better maximize our 1900 sq. ft., we’ve been looking at switching the bedrooms around and consolidating all the boys from two rooms into a single, large dorm room.

Here’s how the house was laid out to start:

The first though was to give them our master bedroom and move into boy room #1, but after measuring out the rooms we decided to give them the downstairs playroom/family room. While that may seem nuts, there were so many great reasons to do it. For starters, my boys play together all.the.time, “camp out” in the same room a lot and get along great. The other thing is that the playroom was the most under utilized space in our house. As a playroom it was a huge waste of space and always covered in the kids’ toys and cheerios. When my sister pointed out that keeping that room dedicated to just toys on the floor was like reducing our living space from 1900 sq. ft. to more like 1600, I couldn’t wait to move stuff around.

Mr. Thrive was a little skeptical about the switch at first because that’s not what you do—not what other families do. But part of this whole THRIVE remodel project has been to embrace this house and make it work for us.  And I knew the playroom would work perfectly as a bedroom for our boys.

To start, we moved everything into a small downstairs bedroom and hauled away the couch. This was the same couch whose cushions were painted in this little incident and never recovered. The fabric was ripped, the foam coming apart and the springs were poking through.

And even though this picture is surprisingly flattering, it’s still so hard to post a picture of how bad this room looked even after the toys were removed.  This room with it’s destroyed couch, terrible stained carpet, unfinished and colored on walls and trim was one of the biggest things I was thinking about when I wrote that I had given up on my house. But after an hour’s worth of heavy spot cleaning, a thorough wall wash down, broken toys and couches removed and two shampoo jobs (yeah, it was that bad), the room looked so much better.

The original plan was to make bunk beds because they’re cheap to make and save space. But I was sooooo ready to be done with them and the jumping/swinging/leaping/climbing/injuring/destroying that goes with them. Plus, if all the boys were going to share a room, I wanted a bed that would have space just for them, transition better into their tween years and be sturdy–really, really, sturdy. Mr. Thrive and I went back and forth on bed designs and finally picked this one from Ana White.

We nixed the corner unit, added some additional storage cubbies underneath and swapped out some of the materials to lower the costs even more. When everything was said and done, we managed to build four awesome, rock solid beds for cheaper than we could have found them used on Craiglist or eBay. What a blessing!

And since we don’t have a garage and Mother Nature tossed an unexpected winter storm our way, Mr. Thrive brought the whole project inside and built all four beds right in the playroom.

Four of the six mattresses had. to. go. They were hand-me-downs to start and beyond hope. The three toddler mattresses had been through several kids and had been jumped on, moved around, picked at, torn apart and duct taped so many times that I couldn’t wait to get them out of the house. My son’s full size mattress from his bunk bed had springs that were starting to poke through so those went as well.

The next trick was to find four new mattresses for cheap. After hunting and searching every store/outlet/warehouse in the valley for weeks, we were blessed a find a store owner blowing out his inventory to consolidate two stores. When he heard we needed mattresses for all of our kids, he cut us a great deal and we walked out of there with four new twin pillow top mattresses for the cost of two base models. Another blessing!

When we got them home, we put them in the bedroom with all the other stored furniture until we realize our 2 yr. old was scaling them. And tearing holes in the mattress cover of the older mattresses that were staying. Thank you so much, kiddo ….

So we moved the mattresses into another bedroom, only to have the same kid find them again … and climb up on all of them … and jump … and sneak Girl Scout Cookies … and pretend to take a nap Princess and The Pea style. Is it bad I never want to take the plastic off?

The boys were so excited to sleep on their own beds in their new room that we caved and put bedding on last night.

Here they all are. Didn’t Mr. Thrive do a great job?

The beds have been puttied and sanded, but still need the painting finished up. The finish work has been my favorite part since I’ve been doing that in THRIVE style: F-R-E-E!

In the next few weeks I’ll show you the painted, finished beds with their lovely {free} paint from our local landfill recycling center,  storage bins made out of one of my favorite {free} mediums and fun {free} room decorations to help each kid carve out their own little space.

So now our house looks like this, which means I got an unexpected, but so needed gift: my own office for THRIVE!

Up to this point Mr. Thrive and I have had to fit our bed, the computer desk and all of my Thrive stuff in our bedroom. We’ve made it work, but it’s been really tight and often messy. The girls’ stuff has been moved downstairs and I’ve started the processes of sorting through all my Thrive projects and moving them over. Right now it’s a total disaster, see?

(I know, I know. I need to wrap up this post, get off the computer and finish cleaning up!)

I’m so looking forward to having my own space for Thrive–being able to keep blog/family stuff separate is going to huge. I can’t wait!

So, that’s the meelllion little projects going on at our house right now-ha! Thanks so much for stopping by!

19 thoughts on “The Great Switcharoo Begins”