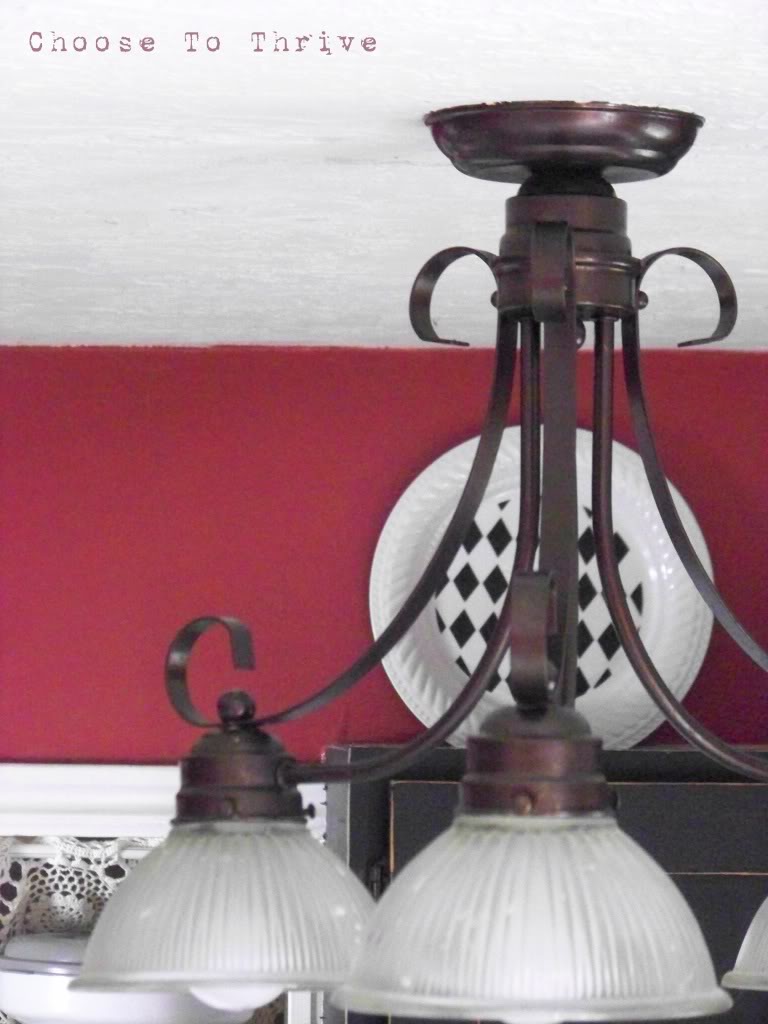 Happy Monday everyone!  Hope you had a great weekend.

I wanted to show you another project in our No-Money Remodel.  Our upstairs has a total mismatched collection of fixtures and ceiling fans. None of them are original and it sort of looks like an odd collection of Home Depot clearance sales and garage sale finds.

My least favorite were two, very brassy fixtures in the kitchen: the main, three bulb light and the ceiling fan.  I have searched through literally thousands of pictures going back to 2004 and these blurry shots from 2007 are the only ones I could find.

I’ve apparently tried really hard to keep the glaring brass out of every . single . picture or have cropped heavily.  Or maybe both.

My decorator neighbor suggested painting both fixtures with a little bit of liquid magic:

Specifically Sophisticated Finishes paint by Triangle Crafts in Blackened Bronze. It’s a little larger than a bottle of craft paint and is usually found by the faux finish paints at craft stores.

I’ve used this stuff in the past to paint a little planter and cover an old utensil crock in my kitchen, but was nervous about using it for fixtures. However, since Decorator Girl has a straight-out-of-the-catalog house and I paint diaper boxes, I deferred to her judgment.

Because I’m lazy Because I didn’t think it was necessary, the only prep work I did was to clean both fixtures with soap and water. No primer, no sanding, nothing. And since I didn’t have the electrical know-how to mess with removing either fixture, I just climbed up on a chair and got to work.

I started with the ceiling fan …

… covering the main fan housing with a thin coat of paint using a cheap-o foam brush. (I ended up doing three thin coats).

To paint the top of the fan without getting paint all over the ceiling, I stuck a meellion little pieces of frog tape around the base.

A pain in the neck, yes, but easier than having to remove the fan from the ceiling all together.

To paint the individual arms, I removed the bolts holding the arms to the housing …

… and then removed the small bolts holding the blades to the arms. Everything went into a ziplock bag to keep the kids from walking off with the parts.

The arms got a good wash down and then a first coat of paint. Just a heads up: it’s going to look terrible at first. I mean really, really terrible.

My first coat on both the fan housing and the arms looked awful and sent me into full oh-crap-I’d-better-figure-out-some-way-to-fix-this-before-Mr.Thrive-gets-home mode.  Thankfully, each coat looked better and five thin coats later, the arms looked awesome. And a little bit like lobsters.

Before reassembling the fan blades and arms, I dipped the heads of the screws in paint and let them dry for an hour …

… then carefully screwed them into position, touching up any scuffs with a quick dab of my brush.

On the opposite side of the blades, the tips of the screws got a quick dab of paint to get rid of that last little bit of brass …

… and all of the blades were reattached to the main housing after everything was dry.

The other fixture came together the same way: wash with soap and water, dry thoroughly and paint with a bunch of thin coats.

Painting the top of the fixture where it meets the ceiling was handled the same way as the fan.

(And I swear to you that this fixture really is clean. I’ve taken these pictures three times and dusted and cleaned obsessively and it still looks like there’s a bunch of dust from this angle. Bleh.)

Using the paint I had on hand made this a great no-cost project for me, but it’s pretty cheap even if you were to buy paint.  I think this bottle was $10 at Michael’s before the coupon discount. I’ve painted two fixtures, a utensil jar and a small planter so far and still have a third of a bottle left.

But hey, Rock What Ya Got.

Fixture re-dos like this would also work great with spray paint or another brand of specialty paint in your choice of colors.

So have fun checking around the house, checking your local recycling center or checking the online classifieds for free/cheap paint.

(And if you’ve painted your fixtures, I’d love to see them!)